The View on Global Equity Markets

The volatility that has been a feature of global equity markets for the majority of 2022 so far, primarily driven by rising inflation and the prospect of the removal of monetary policy accommodation, moved to a new level last week following the Russian invasion into Ukraine. For the week, equity markets declined by on average 2%, however this was well off the lows that were hit following the initial reaction to invasion last Thursday. Behaving in an opposite manner were the traditional safe haven assets of bonds and gold which having seen strong inflows on news of the initial advance by Russia into Ukraine, subsequently gave these gains to finish the week broadly unchanged, while oil, which traded at an eight-year high also gave up some of these initial gains to finish +3.7% on the week.

Russia-Ukraine/Market Comment
Even before the Russian invasion of Ukraine, global equity markets had been negatively impacted by the ongoing uncertainty surrounding the pace of monetary tightening that might be delivered by the US Federal Reserve. While it was widely accepted that US interest rates would be increased at the next policy meeting on 16th March, the uncertainty was focused on whether the first increase would be 0.25% of 0.50%.

Prior to Russia’s incursion into Ukraine market expectations had increased that the first move would by 0.50% particularly as the January inflation reading hit a forty-year high and the labour market continued to near the Fed’s full-employment mandate. Equally, extremely hawkish comments from a number of Fed speakers, most notably St. Louis Fed President Bullard, who called for not only a 50bp increase but also a faster move towards the reduction of the Fed’s balance sheet, weighed on sentiment for risk assets, with the technology sector in particular underperforming.

Adding to the market concerns over a more general move to tighten monetary policy were comments from the Bank of England which suggested the need for more rate increases in the short-term and some comments from a number of ECB Governing Council members calling for the ECB to increase interest rates before the autumn and advocating the removal of the current level of monetary policy accommodation. While central bank monetary policy continues to remain in focus, the real driver of the most recent spike in market volatility has been the situation in Ukraine.

Apart from the shock of the scale of the invasion, and the social and human cost for Ukrainian citizens, the main area of concern for markets was the extent of any sanctions the western allies might impose in response to the crisis and the potential economic damage such sanctions might have on the global economy, but in particular the European economy.

Over the weekend there was a marked and unprecedented increase in sanctions on Russia announced by the EU, UK and US including the potential to remove some of the Russian banks from global bank settlement system Swift. Significantly, for the first time since WWII, Germany has agreed to increase its budgetary spending for NATO to bolster European defence, while also agreeing to send arms to the Ukraine.

Market reaction to the sanctions imposed thus far has been one of mild relief and as a result, despite the initial negative move lower in equity markets on news of the invasion, further market declines have been averted thus far. The situation however remains extremely fluid and equity markets will remain susceptible to ongoing headlines out of Ukraine and to the possible imposition of any further, more severe sanctions.

While market volatility is likely to continue in the short-term as a result of ongoing geo-political events and ahead of the US Federal Reserve meeting on 16th March, we remain of the opinion that volatility will eventually subside and that risk assets will stabilise and recover over the coming months.

This view is predicated on the fact that historically at a time of a major geo-political shock, equity markets typically endure an initial period of weakness of on average 4% on the commencement of military hostilities taking into account for example the Gulf War, Afghanistan, Iraq War and the Russian annexation of Crimea, but ultimately stabilise and recover in the months following the initial shock. 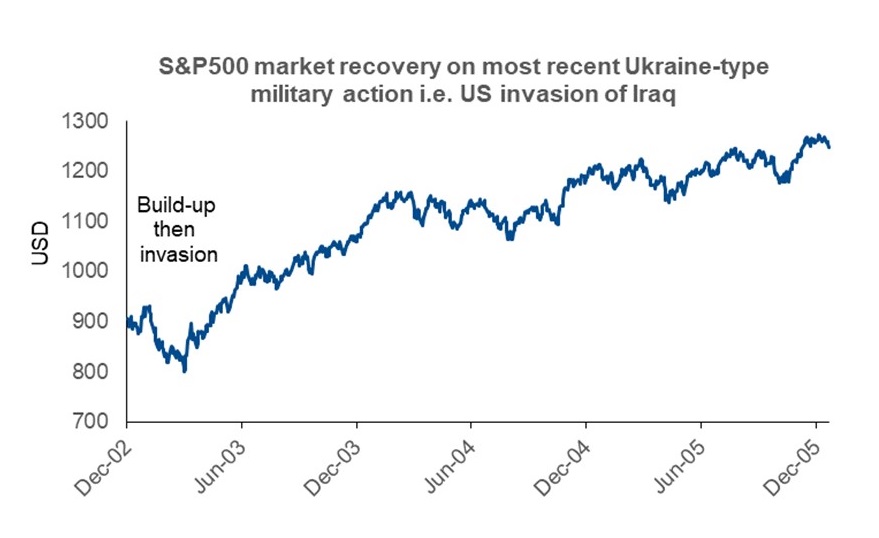 Also supporting our expectation of an eventual market recovery is the fact that as outlined above, the level of sanctions that has so far been imposed will be less economically damaging than could have been the case which will mean a potential economic shock has been avoided for the time being at least.

Another factor that we believe will assist in a gradual reduction in market volatility and which will also support a market recovery over the coming weeks and months is the increasing prospect that the US Federal Reserve will desist from an aggressive increase in US interest rates at its upcoming policy meeting.

Prior to the escalation of the crisis in Ukraine, there were increasing expectations that the Federal Reserve would move to increase interest rates by 50bps at its March policy meeting given the continuing upward inflationary pressures in the US economy. As recently as the middle of February, interest rate markets were pricing in a 50% probability for a 50bps increase, however since the Russian invasion into Ukraine, this probability has fallen to less than 20%.

While a consequence of the Russian invasion has been a further move higher in oil prices, which has been accompanied by a move higher in soft agricultural commodity prices such as wheat, we are of the opinion that the Fed will tread a more cautious path on interest rates and will commence with a 25bps increase, with the pace of further increases being dependent on developments on the geo-political front as well as future incoming economic data.

While it is impossible to predict how long the current situation in Ukraine will last and what the eventual outcome will be, we believe that following the initial market shock, the situation will ultimately stabilise, and that equity markets will gradually recover in the coming months.

In particular, we see Growth areas of the market such as technology, outperforming given the fact that the sector is less exposed to ongoing inflationary pressures than the more economically sensitive Value areas of the market, is less exposed to any extension of sanctions imposed by the western allies and is now trading more attractive valuations following weakness for most of 2022.

Warning: Past performance is not a reliable guide to future performance.
Warning: The value of your investment may go down as well as up.
Warning: Not all investments are necessarily suitable for all investors and specific advice should always be sought prior to investment, based on the particular circumstances of the investor.

Talk to us today about reviewing your investment needs