“Sell in May and Go Away, Come Back on St. Leger’s Day”

History often repeats itself, and this is possibly no more visible than when one reviews the performance of the S&P 500 during the months of May through to September going back as far as 1950. The S&P (Standard & Poor’s) 500 is a market-capitalisation weighted index of the 500 largest publicly traded companies in the US and it is generally regarded as the benchmark for US equities.

A more volatile trading range of equities during this period is highlighted in the graph below, covering the S&P 500 over the last 20 years. 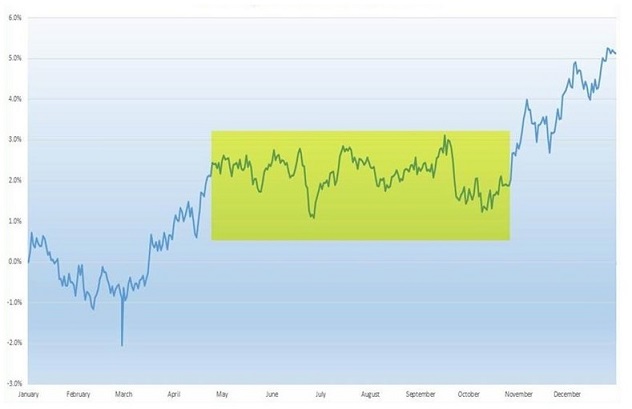 Historically, equities have succumbed to selling pressure during the months of May and June and don’t really catch a bid again until October with momentum then sustaining through to year end. Of course, there are outliers, like 2016 for example, but on average it has paid to either, take profit on those star performers in early May and either rotate into defensive sectors or, hold a cash allocation in your portfolio to position yourself to pick up opportunities as they present themselves through the low volume summery months.

The phrase “sell in May and go away” is thought to originate from an old English saying, “Sell in May and go away, and come on back on St. Leger’s Day.” This phrase refers to a custom of aristocrats, merchants, and bankers who would leave the city of London and escape to the country during the hot summer months. St. Leger’s Day refers to the St. Leger Stakes, a thoroughbred horse race held in mid-September and the last leg of the British Triple Crown.

American traders and investors who are likely to spend more time on holiday between Memorial Day (falling on the last Monday of May) and Labor Day (the first Monday of September) mimic this trend and have adopted the phrase as an investing adage. Indeed for over half a century stock market patterns have supported the theory behind the strategy. From 1950 to around 2013, the Dow Jones Industrial Average posted lower returns during the May to October period of only 0.3%, compared with the November to April period average gain of 7.5%.

Instead of selling in May and going away, some strategists recommend rotation. This strategy means that investors would not cash out their investments but would instead vary their portfolios and focus on products that may be less affected by the seasonal slow growth in markets during the summer and early autumn, such as healthcare for example.

With many client portfolios having accumulated gains of 10%+ year to date, it may be time to reflect on history!

To speak with a Portfolio Manager or Account Executive, please phone the Cantor Fitzgerald dealing desk on 01 633 3633.

Warning: Past performance is not a reliable guide to future performance. The value of your investment may go down as well as up.

Talk to us today about reviewing your investment needs